Drones during disasters: Why we must ABSOLUTELY use them Hurricane Harvey has wrecked havoc. It has been catastrophic and earth-shattering. While we are far from being able to prevent natural disasters like this as a civilization, we must strive to use whatever technology we have to expedite recovery activities after a disaster. We must strive to use drones during disasters because they are the perfect example of technology we already possess that, if used properly, can be really effective. They can find disaster victims, conduct damage assessments to critical infrastructure and deliver supplies like ropes, food, first aid and life jackets during a dangerous situation, minimizing risk and time taken.

By Thursday morning, August 31, 2017, the Federal Aviation Administration had issued 43 unmanned aircraft system authorizations to drone operators supporting the response and recovery for Hurricane Harvey or covering it as part of the media. Before this, they the FAA had banned drones in the Hurricane Harvey disaster recovery zone for the safety of rescue workers. While they did change their mind, it is important to be be vigilant when a disaster like this happens next time because time is everything. During the time of a catastrophe like Hurricane Harvey, every minute is like an eternity.

Why shouldn't we use drones when we are perfectly capable of doing so, especially if they can potentially minimize death and speed up recovery? Sure, they can be dangerous if not used effectively but so can a car. Should we all stop driving then?

Some of the ways we can use drones during disasters

The safety level of any given area is directly related to the health of power lines, roads, bridges, communication cables, gas, water lines and other critical infrastructure. Drones can be used to quickly assess the damage that has been done which is one of the most important strategies that must be applied after a disaster.

To minimize further damage, drones can be used to deliver supplies, provide support to damaged infrastructure and establish communication lines quickly. This is especially true if the situation and/or area is too dangerous for rescue workers to tread through. The worst thing that can happen other than victims themselves being killed is if something happens to rescue workers.  This ought to be one of the most important reasons for using drones during disasters.

In a disaster, fires are common. This puts not only the victims but also the rescue operators, in serious danger. Drones can effectively eliminate this risk and can be used in battling fires remotely.

Chemical CBRNE events are even more dangerous for people to tread in. During the Fukushima Daiiichi nuclear plant event, drones were used to assess the damages.

Drones have the capacity to produce accurate 3D models of an area, conduct land surveying with sharp resolutions per pixel and gather millions of data points in a short amount of time. The major advantage is that they can fly over areas that are normally very difficult or dangerous to reach which can be used to identify the most damaged areas after a disaster.

As you can see, they can play a major role in disaster management! Not using them is a mistake and should be effectively avoided (provided the operators are qualified and experienced, of course!)

During this disaster relief

Drones will be used by insurance companies to assess the flooded area in order to record the damage done. This is likely going to be the first time drones are used in a large scale manner to aid human inspectors.

Emergency units are reported to be flying into areas that highly risky in order to rescue victims.

News and media outlets are using drones to cover what is going on without risking the lives of their reporters.

Here are some drone footage of the damage that was done: 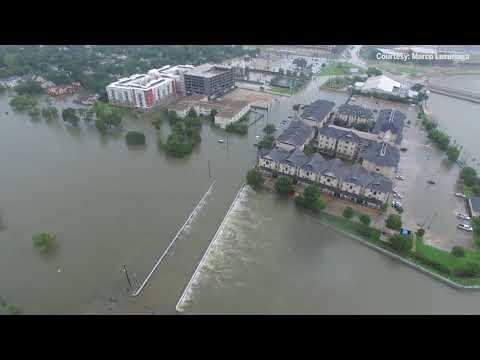 It seems like we are finally learning the role drones will play in any future search and rescue operations and this is definitely a very good thing!